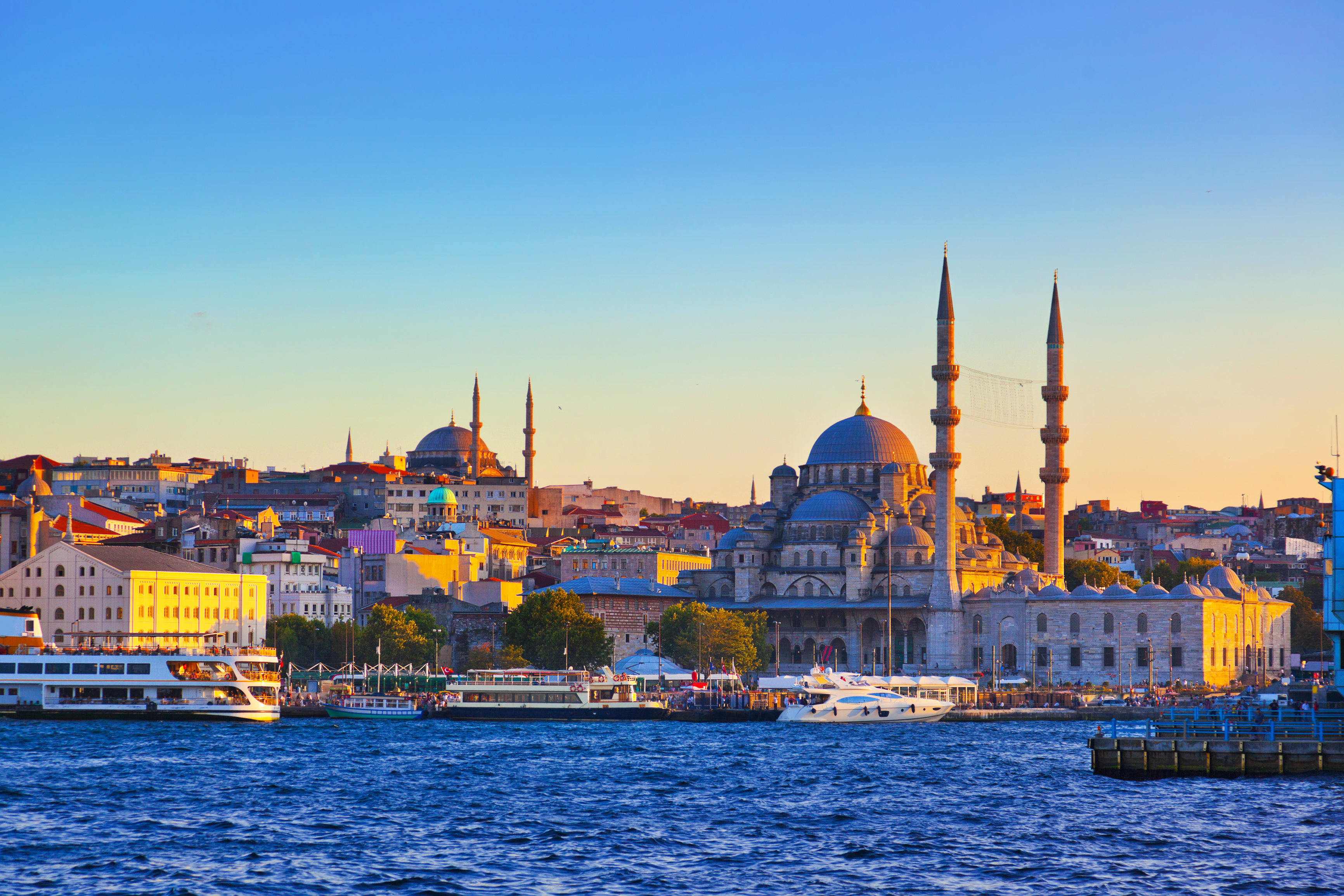 As the only country in the world to sit astride two continents, Turkey boasts a long, interesting history with a unique culture, rich in both East and West influences. Rapidly modernising yet maintaining the ancient traditions for which it is renowned, Turkey is a fascinating country. With fantastic cuisine, fabulous coastlines, spectacular cities, impressive historical sites and archaeological wonders, a trip to Turkey is bound to be unforgettable.

As Turkey is such a large country the climate varies greatly from region to region.

Istanbul has warm summers with temperatures averaging 28-30°c (82-86°F). Winters can be chilly but rarely do temperatures drop much below freezing. Rain is to be expected in winter as is a little snow.

The Black Sea coast tends to be rainy all year round. Summers are mild and winters are quite chilly.

The Aegean and Mediterranean coasts have mild, rainy winters and hot, dry summers.

The south-east tends to be dry and mild in winter and very hot in the summer with temperatures above 45°c (113°F) not unusual.

The mountainous eastern region is predictably very cold and snowy in winter and pleasantly warm in high summer.

The people of Turkey observe a number of holidays throughout the year. Normal business patterns may be disrupted during Ramadan, some restaurants may close during the day and there may be restrictions on smoking and drinking. Tourist areas are generally unaffected. Ramazan Bayrami (end of Ramadan) and Kurban Bayrami (Feast of the Sacrifice) may last anything from three to ten days depending on the region. Transport and hotels are very busy during this period so travel is not usually advised.

There are international airports in Istanbul, Ankara, Izmir and some of the Mediterranean resorts. Direct flights operate to and from Istanbul from a large number of world destinations.

Domestic flights run between most of the major cities in Turkey. A number of cheap, no frills carriers operate routes between Istanbul, Ankara, Antalaya, Izmir and other major regional airports.

Ankara (Esenboga - ESB) airport is approximately 33km (21 miles) from the city. Istanbul (Ataturk) airport is 24km (15 miles) west of the city. Shuttle bus services operate to and from both airports.

Istanbul can be reached by rail from a number of major European cities. Rail passes are available.

Travelling internally by rail is relatively cheap and comfortable. Turkish Railways have sleeping cars, couchettes and restaurant cars. Some are air-conditioned and express trains are available.

Turkey is easily accessed by road from a number of European countries. Coach services regularly run from Austria, France, Germany, Greece and Switzerland amongst others.

A number of private companies operate domestic services between major towns and cities in Turkey. Services are generally faster than trains.

Extensive bus and some trolley bus services operate in Istanbul and other towns and cities. Bus services tend to be reliable, modern and easy to use.

Traffic drives on the right. The minimum driving age is 18. Front seat belts are compulsory and children under 12 are forbidden from sitting in the front. The speed limit is 120kph (75mph) on dual carriage ways, 90kph (56mph) on highways and 50kph (31mph) in built up areas.

Take caution as road conditions and standard of driving can be quite poor in Turkey.

There are a number of ports located throughout Turkey including Antalaya, Marmaris and Istanbul. Sea buses and ferries operate between Turkey and Italy, Cyprus, Greece and Ukraine.

Internally frequent car ferry services cross the Dardenelles at Gallipoli from Canakkale to Eleabot and Gelibolu to Lapeski.

Turkish is the primary language. Kurdish is spoken by a minority in the south-east. French, German and English are widely spoken in major cities and tourist areas.

The international dialling code for Turkey is +90.

In an emergency call the following numbers:

A visa may be required, please contact the consulate before travelling.