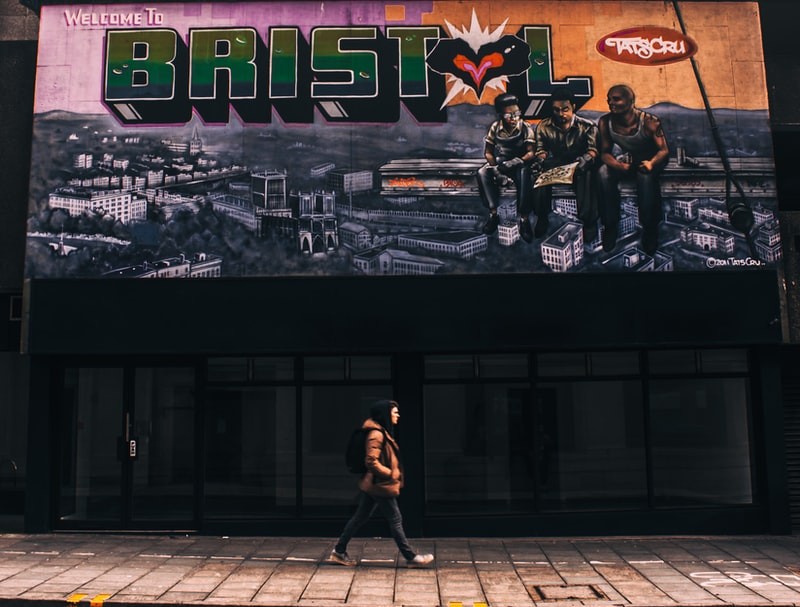 The most infamous street artist you’ve never seen, Banksy is a Bristolian phenomenon. Known globally as an anonymous political activist, Banksy uses his trademark stencilled graffiti technique to paint satirical street murals for the masses; without ever being seen doing it. The Banksy mystery has intrigued the world since his murals began cropping up around his (assumed) hometown of Bristol in the 1990s as the daring and provocative content of each piece gained traction, sparking national conversation.  Since beginning as a seemingly lone superhero of sorts evolving from the Bristol underground scene, Banksy has become a global name with his art being some of the most sought after in the world, selling for millions a piece. A trip to Bristol would not be complete without some Banksy hunting, so read on to discover where to see Banksy in Bristol and see for yourself what all the fuss is about.

In one of his earliest works, a spray painting cat is seen being approached by two menacing dogs and with a quote above, Banksy perfectly summarises his own phenomena: “There are crimes that become innocent or even glorious through their splendour, number, and excess.” The glamorisation and global hysteria around the artist and his art allows him to break the law, publicise it, capitalise on it and get away with it! He is an icon of this generation: a modern day magician who tricks the public into looking at an art piece in plain sight, while the real story is hidden entirely from view. His quest for anonymity is rivalled by the nature of his work that constantly places him in the spotlight; loaded double entendres such as this that epitomise Banksy are the very things that lull the world into buying exactly what he’s selling.

If you’re wondering where to see Banksy in Bristol, some of his work can be hidden away but some is purposely in plain sight; this one is the latter. Widely thought to have been painted in response to alleged ‘hard-line police action’ at unlicensed raves in 1999 Bristol, Banksy’s Mild Mild West has become a vital piece of Bristol’s culture and heritage. Suggesting that it would be a mistake to underestimate the relaxed, ‘mild’ party types that government bodies aimed to discipline, Banksy yet again speaks for the voiceless and controversially sides with the underdog. Mild Mild West was defaced in 2009 but quickly repaired: Bristol City Council even planned to encase the mural in glass to protect it from potential future vandals furthering Banksy’s omnipotent relevance to his supporters and beyond.

Nearby accommodation: Haven Apartments are just a five minute walk from the Mild Mild West mural and offer ideal serviced accommodation for couples wanting to indulge in the culture of the city.

The Girl with the Pierced Eardrum

A parody of Vermeer’s iconic Girl with the Pearl Earring, Banksy’s 2014 Girl with the Pierced Eardrum can be found hidden away near Bristol Marina. Perhaps originally a commentary on surveillance as her earring is replaced by an alarm, this piece became even more relevant with a relevant recent addition. It is unconfirmed whether this is the work of Banksy himself, but in April 2020 a surgical face mask was added to the girl’s face amidst the coronavirus global health crisis. Banksy is renowned for speaking out on current affairs so it’s likely the street artist is behind this update acting as a reminder for locals to stay safe by wearing a mask when in public.

Rose Trap / Rose on a Mousetrap

On the list of where to see Banksy in Bristol, this is one of the more hidden: small but mighty, you may have to look a little harder for the next piece on our list. One of Banksy’s more inconspicuous murals, Rose Trap is the only framed Banksy piece in Bristol. Appearing in the early 2000s, locals loved it so much that they clubbed together and invested in a glass cover and frame to ensure it’s protected from similar damage of his other works around the city. More so drawing upon the paradoxical than the political, the mural depicts a rose acting as bait in the trap: perhaps a comment on the trap of beauty and the risk associated with seeking it.

Alternatively Well Hung Lover, also known as Naked Man, appeared in 2006 on the side of a sexual health clinic in Bristol; a far more obvious location on the where to see Banksy in Bristol list. It depicts an adulterous couple having been almost caught out by the woman’s husband, with the ‘other man’ hanging from the bedroom window. After strong support from 97% of locals surveyed, Bristol City Council deemed the graffiti retrospectively legal and granted protection for the mural, despite it appearing during a time when the council wanted to put a stop to the rise of graffiti in the city! Banksy has become such a powerful phenomenon as he seems to evade legal action, partly due to being anonymous, but mostly due to the public’s unwavering support of the artist. Despite graffiti being an illegal act and his work appearing to be bold, politically charged exposés, he has gained a seemingly untouchable power, flouting the authority of the law.

Nearby accommodation: Meridian Suites are just a short walk from Well Hung Lover and are perfect for a girls trip or solo adventure to discover all the Banksy locations in Bristol.

Something a bit different, this textual piece creates a smiley face with a quote and two air vents in a city centre car park. “You don’t need planning permission to build castles in the sky”: many see this as a statement from an artist to fellow artists; Banksy doesn’t seek permission to make his art so tells other artists to not hold back from dreaming. Banksy clearly believes in the power of the artistic form as a method of expression and stands as a voice of all artists to not be confined to artistic stereotypes: art for art’s sake!

Nearby accommodation: SACO Bristol - Broad Quay are just a ten minute walk from the Planning Permission quote making it simple to stay in Bristol in comfort and style, while exploring all Banksy locations with ease.

Now that you're armed with this amazing art guide, just brush up on your Bristol facts to get ready for your new favourite city break and with a Citybase serviced apartment, you can rest assured that your trip is in safe hands: what more reasons do you need to visit? 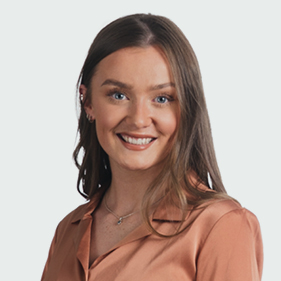 banksy, where to see Banksy in Bristol.

The Ultimate Checklist For Each Type Of Holiday [Infographics]

The 21 best places to eat in London

Top 12 Family Fun Things to do in Dublin

The 5 Best Serviced Apartments for Your Trip to Cambridge: Perfect for Couples, Groups, Families & Friends