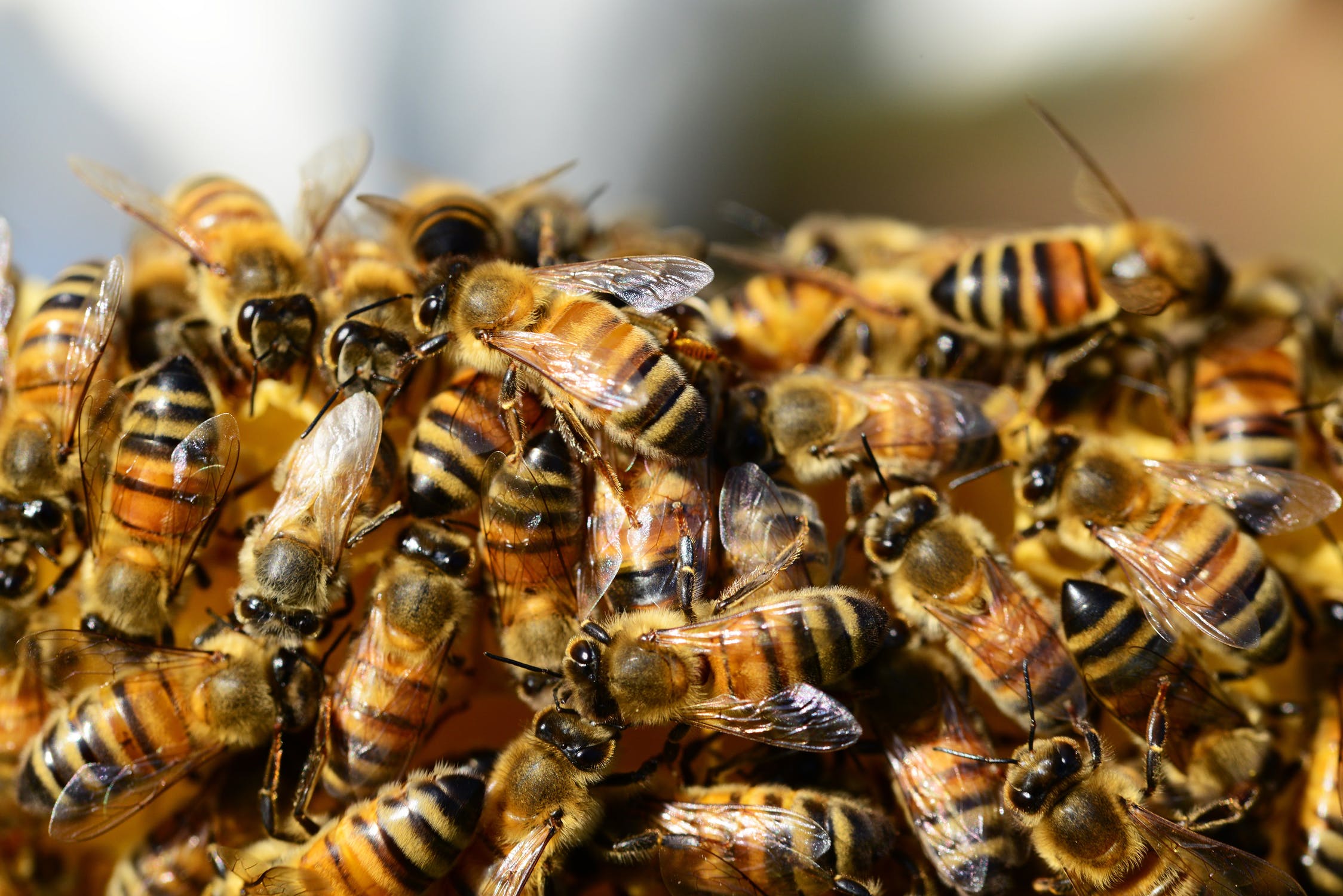 This month, we were buzzing with excitement as we went to Manchester to find the bees that have now made this northern city home. We knew people had BEEn BEEfore us, and they had given us unBEElievable reviews. So, we decided to see for ourselves what the buzz was about. Follow the map below and click on each star to see which bees we found or print out the trail and give it a go for yourselves.

The Manchester Bee Trail is the biggest public art project that Manchester has ever played host to, and artists, school children, and charities have all taken part in decorating large fibre glass bees, and smaller baby bees. Each larger bee sculpture has been placed in various landmarks, streets, and attractions across the city with the aim of reconnecting people with the area and explore the lesser known parts of Manchester. 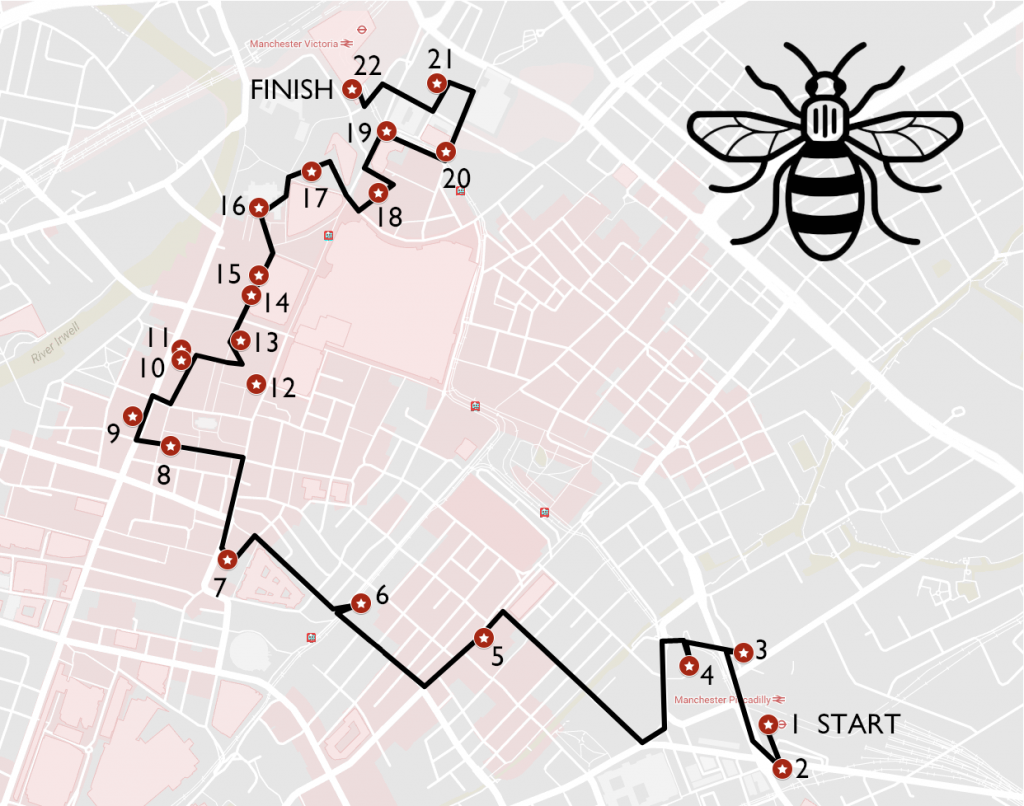 Since the 1800s the bee has been the iconic emblem of Manchester as a symbol of the Mancunian's attitude to hard work and tenacious spirit. In more recent years Manchester's bee has become more than this; it has become an icon of defiance, community, and solidarity, making this project even more special.

We began our journey in Manchester Piccadilly station, home of the Aubee, a 1.5 metre tall gold bee designed by Hydro Monkeys. Although simple this bee is striking in the hustle and bustle of the busy train station we had arrived in. The bee resembles the city's drive for leading the way and setting new standards for the transport industry and businesses alike.

Wandering up the road to the corner of Fairfield Street close to Manchester Piccadilly station, you can find the Urban Jungle Bee; focused on the outstanding beauty of the green park spaces between Manchester's residential and commercial areas.

The Doodle Bee is definitely one of our favourites on this list and is hard not to spot. Decorated by Dave Draws and inspired by the city and the magnitude of multicultural people that live within it. It picks out the tourist hot spots of the city and encourages visiting them all within this artwork.

Bee-sy Rider can be found in Piccadilly Place and as we walked up we could easily see this one was a popular sculpture, with children surrounding it taking photos. This bee is just taking his time wheeling through the city.

This gorgeous watercolour bee designed by Lois Cordelia adopts the sentiment of loving yourself and being beautiful, whilst combing adoption charities in the city. Showing that adoption is life changing for everyone involved.

There could be no other bee placed in Manchester Art Gallery. This bee is a gem, celebrating the suffragette movement and reflecting the history of Manchester's jewellery industries.

Located on Albert Square, This is Manchester Bee stands out from this public space. Its colourful exterior contrasted by the base of a dark Manchester skyline. It references how Manchester feels as an inclusive city, welcoming everyone.

Found on King Street, USBee pays tribute to the largest tech city outside of London. Standing on binary codes and designed by One Red Shoe, this bee is paving the way to a more technical and modern future.

This wild bee can be found in House of Fraser, and although we did pop in and have a shop, this bee is well worth seeing even if you don't. Designed by Kathleen Smith, this artwork demonstrates how even the smallest spaces can be turned into a home for wildlife.

The Homing Bee's mix of black and fiery colours in St Ann's Square is based around the artist's own experience of being on the brink of homelessness. The bee symbolises that everyone, just like a bee, needs a home.

This vibrant bee decorated by Meha Hindocha tells a story of a busy city and the residents that have help shape it. Visitors get a full glimpse into Manchester's history, from the past to the present day.

Queen Bee is located inside of The Royal Exchange and was created by Lee O'Brien whose inspiration came from one of England's most celebrated queens. This unique bee adds royalty and history to the trail we followed.

Created by Lauren Mullarkey with Chris Emerson, Chris Ball, Christian McGrath, Jean Barrett, Stevie Williams and children, young people, staff and volunteers at the Trust, this bee is one of a kind. Designed with the Seashell Trust in mind.

We loved this bee and its big beautiful eyes peering over the hive of clouds. Inspiring hope, wisdom and happiness, this bee portrays a happier world and diverse city in which Manchester has become over the years.

Super Bee to the rescue. Protecting Manchester from harm and looking after its residents, this bee was a firm favourite amongst everyone. Designed by Adam Pekr-Inkversion it captures his vision to portray how crucial bees are to the planet.

16. The Bee of Hope, Community, and Respect

This bee was designed to remember those who lost their lives on May 22nd 2017. The bee features 22 flowers to resemble the 22 people and Ariana Grande's lyrics were perfectly decorated onto the bees fragile wings.

We found the Mr Bee'nn bee in the Cathedral Gardens. Based around a popular children's cartoon, Mr Bee'nn is just an ordinary bee who goes on extraordinary adventures.

We followed the road up to the Printworks and found Hac Bee enda. A portrait of Mr Manchester on its hive and the iconic black and yellow stripes.

Bees are clever animals. The Waggle Dance is a dance performed by bees to help others find food. Resembling co-operation and a theme of togetherness, this bee symbolises all that Manchester has grown to be in its community.

Decorated by Nomad Clan, this artwork tells the history of Manchester, from the city's foundations as a fort in Roman times, to the modern times and industries that have revolutionized Manchester.

This simple bee was second to last on our path. Designed by Andrew Cornes, the title of the bee correlates with the quote of Victor Hugo "life is the flower of which love is the honey" once again symbolising Manchester's community and future as a city.

The Manchester Movement Bee was designed by Shelley Jayne Illustration and can be found in the final location of Manchester Victoria Station. Its bright and vibrant colours reflect how quickly the earth is becoming connected by public transport. The design came from a basis of Manchester's iconic viaducts.