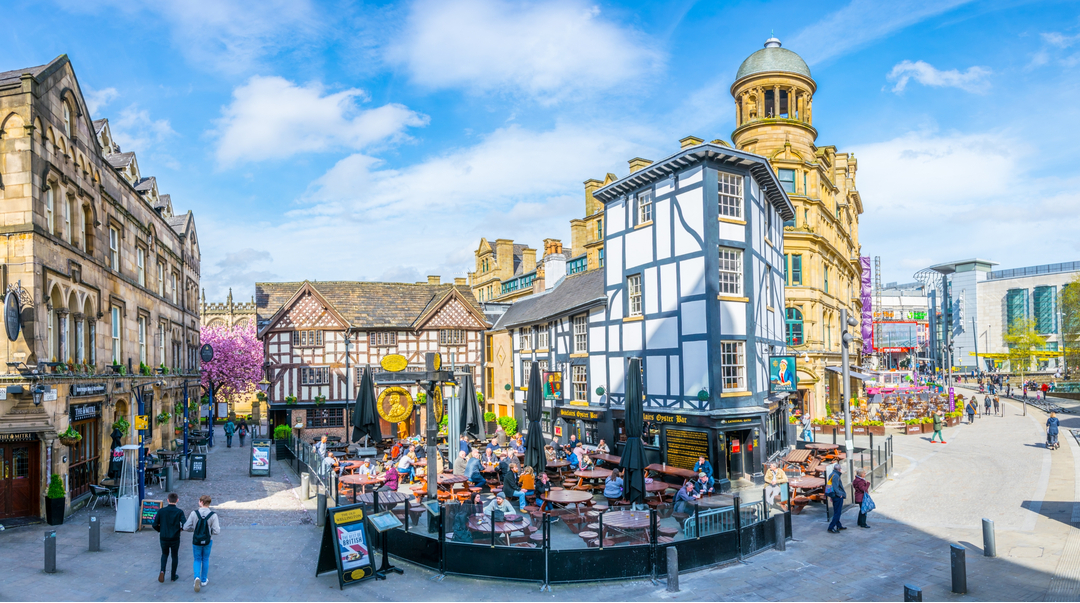 A little like Paris, Manchester is divided into quarters - not four equal parts, but rather different areas in the city. At a loss already? Fear not our dear traveller. Let our Manchester City Guide unpack the maze for you in readiness for selecting your ideal serviced apartment in Manchester.

A beautiful fusion of old and new, traditional and alternative, Manchester can rock any traveller's world. You just need to know where to go. Every area of the city offers something unique and focuses on a particular lifestyle. Come explore with us…

Click the quarter's name to read more about this area of Manchester or simply scroll down for an overview.

Alternative, arty, bohemian and full of little independent shops, bars and cafes, the Northern Quarter is the place to go if you want to find something unique.

Centred around Oldham Street and covering the area between High Street, Great Ancoats Street, Paton Street and Piccadilly Gardens, the Northern Quarter (or NQ as it’s known) is perhaps one of the most defined and well known quarters of Manchester. It even has its own loyalty card for shoppers! The area has a type of shabby, bohemian style but boasts some of the best independent shops and music venues in the city.

Historically, the region where the Northern Quarter now stands used to belong to the father of the Methodist Church John Wesley. It later became the home of the first cotton mills that transformed Manchester into a powerhouse during the Industrial Revolution. Today, wholesalers of the ‘rag (fashion) trade’ still have their homes here as well as independent shops and artists.

Style snapshot: Alternative and bohemian
Great for: alternative arts, fashion, music, bars, restaurants and vegetarian cafes
Trivia fact: The Northern Quarter was credited with the birth of ‘Saturday night’ in Manchester. During the Victorian era, because of all the shops located here, certain roads offered late opening hours and the streets were filled with people up to midnight when many restaurants operated a midnight food sale. Today, the late opening night still takes place on Thursdays, albeit just until 8pm, not midnight!
Sightseeing highlights
• Afflecks Shopping Centre – artisanal and alternative retailing outlets as well as the 3M Theatre
• Street art as you wander the streets
• Soup Kitchen and Night & Day Café – two of the most well-known indie music venues in the city
• Sugar Junction (vintage), North Tea Power and Teacup Kitchen tea rooms
• Nightlife on Thomas Street
• Earth Café - vegetarian cafe

Serviced Apartments in the Northern Quarter 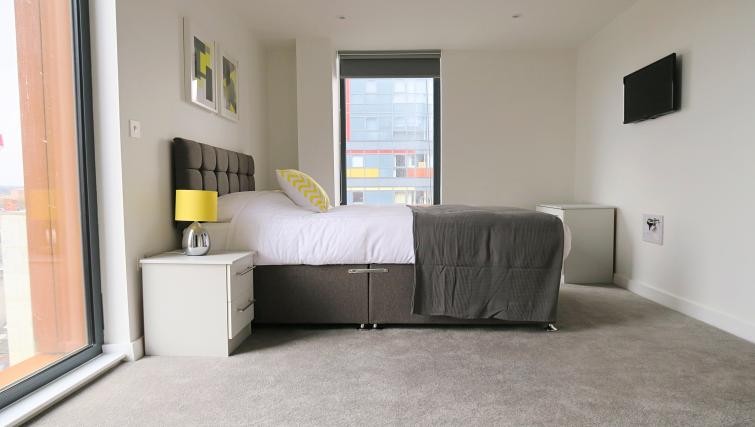 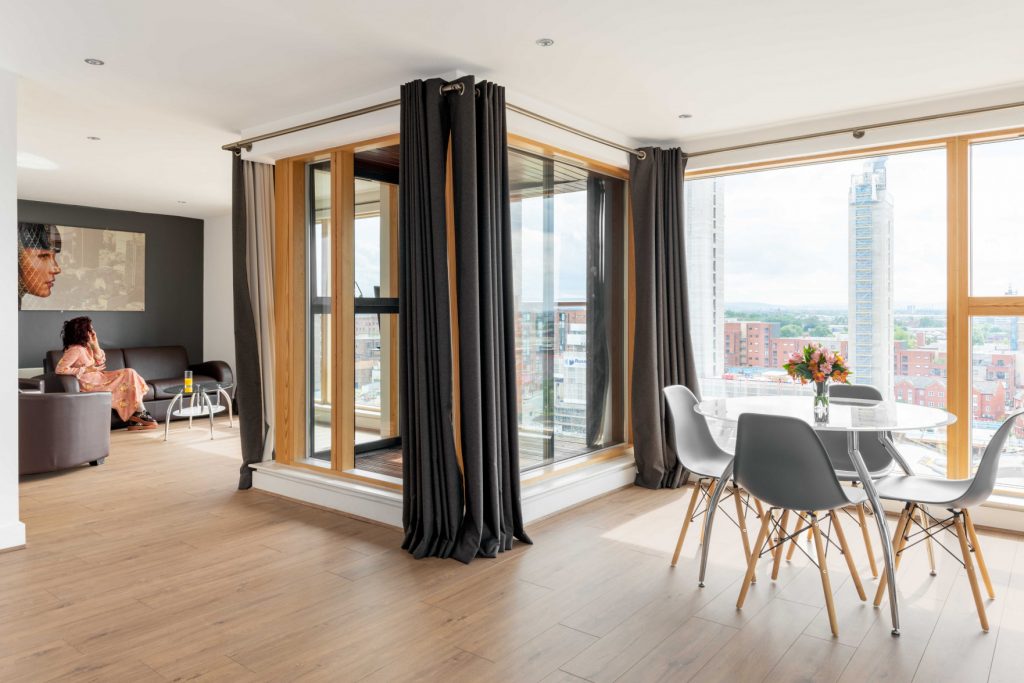 Also known as the Central Retail District and home to the Arndale Centre, Selfridges, Harvey Nichols, The Triangle mall and The Printworks entertainment complex, this is where you will get most of your shopping done.

Centred on Exchange Square and roughly boarded by Deansgate, Miller Street, Shudehill and Market Street, the Millennium Quarter is where you will find some of Manchester’s main attractions. Bombed by IRA in 1996, the area has since been the focus of much regeneration and it is now one of the most modern parts of Manchester.

Serviced Apartments in the Millennium Quarter 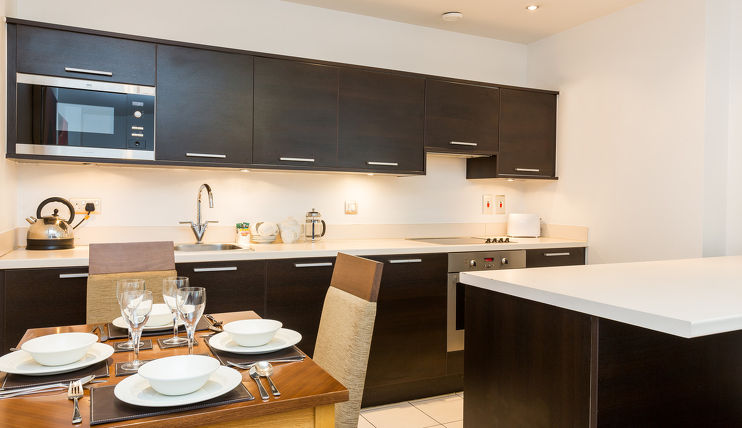 Also known as Peter’s Fields, the Manchester Civic Quarter encases the civic heart of the city and is home to some of Manchester’s most iconic buildings as well as many bars and restaurants.

Centred on Albert Square and covering the area in between John Dalton Street, Deansgate, Peter Street and Mosley Street, the Civic Quarter is home to some of Manchester’s most beautiful Victorian buildings, including the Town Hall and the Exchange Theatre. It also boasts some stunning examples of later period architecture such as the Manchester Central Library and the Albert Hall, both built in the early 1900s. To add the cherry on top of the cake, this area of the city is also full of bars, eateries and high-end shops definitely worth exploring.

For the purpose of this guide, we will extend this quarter to cover the area in between John Dalton Street and Market Street, as this is also a period part of the city offering shopping, bars and restaurants.

Style snapshot: Period architecture and decadent elegance
Great for: Victorian architecture, bars & restaurants, high-end shops
Trivia fact: both the Town Hall and the Royal Exchange were built to replace their older original versions, which were too small following Manchester’s rapid expansion during the Industrial Revolution. Queen Victoria refused to attend the opening ceremony of the Town Hall in 1877 because she didn’t like Abel Heywood, the then Lord Mayor of Manchester.
Sightseeing highlights
• Manchester Town Hall
• Albert Square – the epicentre of several Manchester festivals and markets, including the legendary Christmas Market
• Manchester Central Library
• Albert Hall – originally a Methodist Church, now a music venue
• St Mary’s the Hidden Gem Church
• Royal Exchange Theatre
• Shopping around St Anne’s Square, King Street and Deansgate, including the Vivienne Westwood store in Spring Gardens, at the end of King Street.

Serviced Apartments near the Civic Quarter 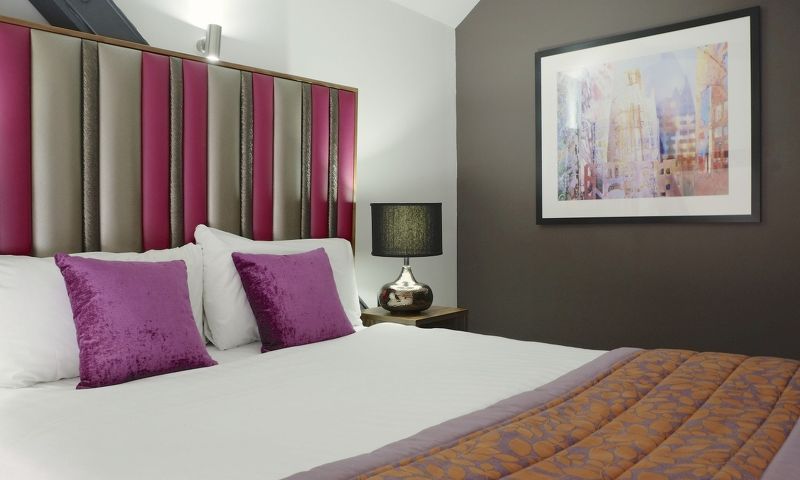 Spinningfields is the newest quarter of Manchester and offers designer shopping as well as the most stylish bars and restaurants in the city.

The latest development on the block, Spinningfields is centred around John Rylands Library, covering the area in between Bridge Street, Deansgate, Quay Street and the River Irwell. For the purpose of this guide, we will also include the area in between Bridge Street and Blackfriars Street, as this also forms part of Manchester’s most up-market zone.

Think designer shopping and artisan eateries galore. The cocktails and food here are simply to die for. Definitely a destination for foodie and cocktail lover.

Style snapshot: Stylish, cosmopolitan and high-end
Great for: shopping, exclusive bars and restaurants
Trivia fact: Spinningfields is a work in progress. There are buildings and areas still being added to the complex, but this Manchester quarter has already been branded "The Canary Wharf of the North" by the Financial Times.
Sightseeing highlights
• People’s History Museum
• Manchester County Court
• Manchester Opera House
• Bureau Gallery – focusing on dynamic and contemporary art
• Shopping outlets at Spinningfields and Deansgate
• San Carlo, Manchester House, The Alchemist and Australasia – some of the most exclusive eateries in Manchester
• Hardman Square – the home of several events especially over the summer 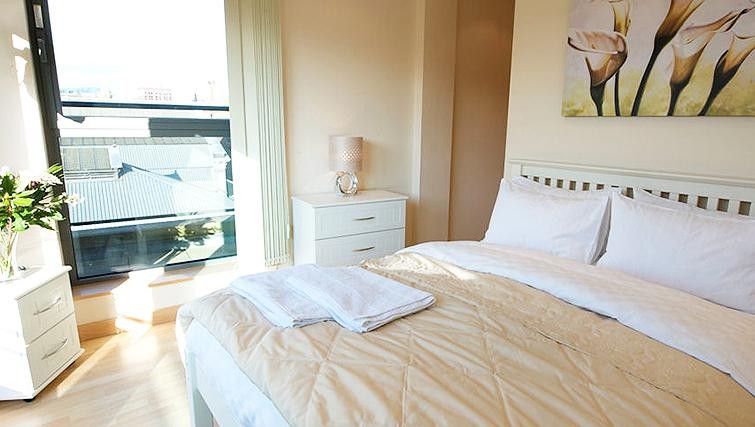 Centred on Piccadilly Gardens and having train links to the whole of the UK via Piccadilly Station, the Piccadilly area extends from Great Ancoats Street to the train station itself, then across to Piccadilly Gardens, down Portland Street, Oxford Street and up Mosley Street on its way back to the Gardens. Its tall large buildings, office blocks and busy streets have quite a distinct feel.

Nestled in the middle of all this is Manchester's Chinatown. Located in the square between Mosley, Charlotte, Portland and Nicholas Street, Manchester’s Chinatown is the second biggest Chinatown in the UK and the third biggest in Europe. An array of Chinese and Asian restaurants surround Faulkner Street’s Paifang Gate and car park conveniently located right in the middle of the complex. The Chinatown is particularly interesting at night, when all the luminous Chinese signs are lit up and the streets gain a yellow and red look, considered lucky colours for the Chinese.

Home to bars, restaurants and entertainment venues, the Gay Village in Manchester is one of the most loved gay quarters in the UK.

Centred on Canal Street and spilling over the surrounding roads, the rainbow colour flags and vibrant look will let you know exactly where you are. Food, drinks, music and clubs, you will be spoiled for choice here! A nice area to wander through or go out in regardless of your orientation. Canal Street itself makes for a very pleasant walk during the summer.

Historically, this area of Manchester, especially Canal Street, has been at the centre of the gay community in Manchester since the early 20th century, when being gay was still illegal! Over time, it has grown into one of Manchester’s most famous quarters.

Style snapshot: Vibrant and lively, gay focused but friendly to all visitors
Great for: bars, restaurants and clubs, gay community
Trivia fact: Alan Turing was a pioneer of computer science, logician, mathematician and wartime code-breaker who was convicted of gross indecency (homosexual acts) in 1952. It is said that the damage caused by this conviction is the reason why he took his own life two years later. He is today a gay icon in the city and a symbol of the prejudice gay people still face. A statute in his honour is located at Sackville Park, across the canal from Canal Street.
Sightseeing highlights
• Palace Theatre
• Satan’s Hollow – Rock nightclub
• Canal Street – vibrant line up of bars, restaurants and clubs
• Alan Turing Memorial – a pioneer of modern computing and gay icon

Serviced Apartments near The Gay Village

Another business orientated part of Manchester but rich also in entertainment, the Bridgewater area is dominated by theatres, exhibition centres, casinos, bars, restaurants and hotels.

Centred on Lower Mosley Street and revolving around the Bridgewater Hall and the Manchester Central Convention Complex, it’s no surprise that the Bridgewater area is a destination for visitors, especially those attending an event in the city. The region is also rich in bars, restaurants and shops, providing full entertainment and being within easy access to the city's retail and business districts - Millennium Quarter and Piccadilly.

Style snapshot: Business, entertainment and culture focused
Great for: cinemas, theatres, casinos, hotels, shops, bars and restaurants
Trivia fact: The Hilton Tower is actually called The Beetham Tower and it is home to the hotel itself as well as residential apartments. It’s currently the tallest building in the UK outside of London, although Tower 1 in Owen Street (also in Manchester) is set to break this record once it’s finished.
Sightseeing highlights
• The Bridgewater Hall - theatre
• Manchester Central Convention Complex
• O2 Ritz Manchester – theatre
• Cloud 23 – bar inside the Hilton Tower with panoramic views of Manchester
• Great Northern entertainment and shopping complex

Voted one of the best places to live in the UK by the Sunday Times in 2015, Castlefield is full of culture, entertainment and superb pubs.

Moving Northeast from the A57(M) and centred on the Bridgewater Canal Basin, Castlefield is where central Manchester starts to become a lush suburb. Offering the best of city life – culture, bars, restaurants and entertainment – with a village feel, Castlefield offers some stunning urban sceneries and canal walks. Definitely the hip chic part of the city. 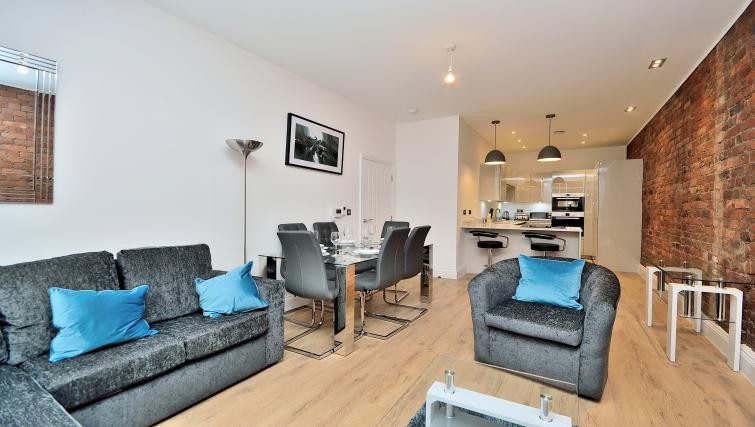 Now you know some of the best areas to go to in Manchester, why not check out some of our top apartments in Manchester too! Located across all the areas mentioned, we believe you'll find an apartment that's perfect for your stay.