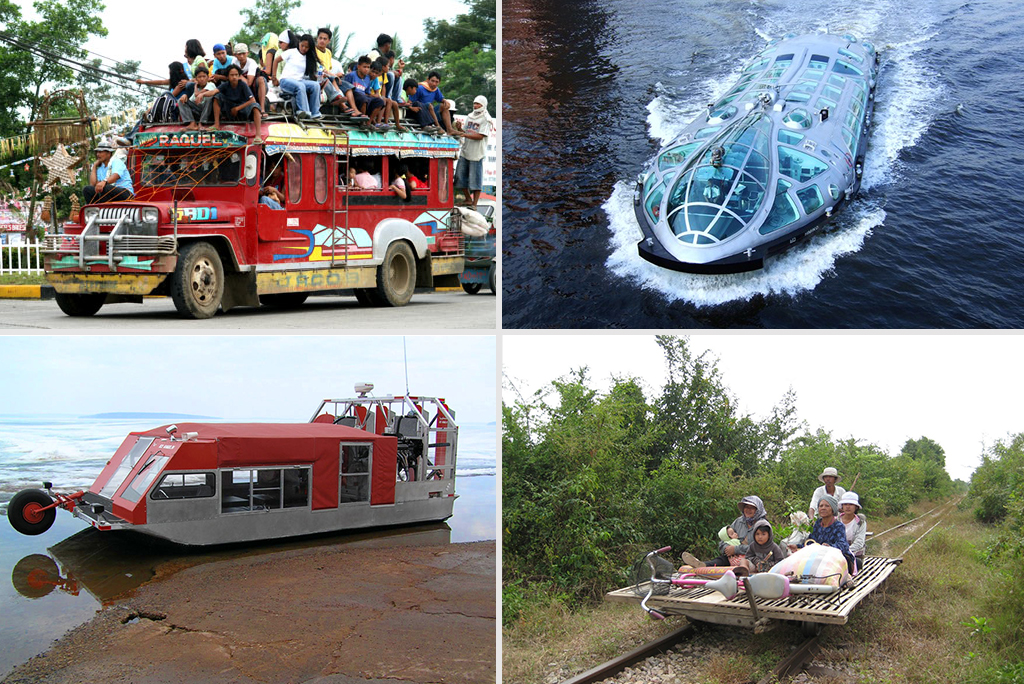 Ever wondered how you would commute to work if we lived somewhere else in the globe? 4.3 million Brits commute to work using public transport everyday, while the modes of transport in the UK are fairly set and regular - trains, buses, trams or boats, some countries have more ingenious ways to get their people to and from work. There are some fairly unique methods even here in the UK!

Our list of 22 Public Transport Methods You Won't Believe People Use will not only show you what these methods of public transport look like in action, but also give you a taste of what it would be like to commute in these countries. How does it compare to your commute?

The Camel Bus in Cuba, also known as a trailer bus, is formed by a truck head and passenger carrying trailer. Once a common mode of public transport, it has fallen out of fashion in recent years as it's hard to drive and prone to causing injury to passengers. Only a handful of countries around the world still use them.

While hovercrafts are not a common mode of public transport, anyone commuting from Isle of Wight to Portsmouth, England, will still need to board one. Definitely one of the coolest commute rides on our list.

The commute in between Madeleine Island and Winsconsin in the USA is full of extremes. During the summer, you will need to take a ferry and during the winter you will have to drive on an ice road. But in between, when the lake freezes over and the ferry can no longer operate but the ice road is not yet strong enough to support vehicles, you will have to catch the Ice Angel, a hybrid of a airboat also known as a windsled.

In Thailand and Laos a regular bus commute could include a songthaew, a pick up or small truck that has been modified to carry passengers and goods as a share taxi or bus.

Talk about a pimped commute! Jeepneys, also known as ‘jeeps’, are the most popular mode of public transport in the Philippines and are essentially jeeps that have been modified to carry passengers. Other examples of similar modified and embellished public buses include the Chiva Bus in South America, the Chicken Bus in Central America and the Matatu in Kenya.

The Totora boats are made of Totora reed and are the main mode of transport for the indigenous Uros people who live on man-made floating reed islands in Lake Titicaca, in Peru and Bolivia. Their civilization pre-dates the Incas and their boats are also a big hit with tourists.

Wuppertal Suspension Railway, also known as an Electric Elevated Railway Installation, is an unique public transport system to Germany. Think of a train that runs upside down, hanging above the River Wupper and local streets. In case you are wondering, yes, it has fallen down on occasion.

The Central Moving Walkway in Hong Kong is the longest outdoor covered escalator system in the world and it links areas within the Central and Western District of Hong Kong. With all those steps and walking, this is probably one of the healthier commutes to work!

The funicular is a mode of public transport used in regions where there is a steep slope and is essentially a tram that works like a seesaw, using carriages at different sides of the "rope" to counterweight each other and help power the one going up. While the one in Lisbon has the quirkier look, funiculars are used in many countries around the world including Turkey, Italy, USA and France.

The auto rickshaw, also known as the ‘tuk tuk’, is a three-wheeler passenger carrying bike used across many countries in Asia, Central America and Africa. In Cuba it's called the Coco Taxi, as it has a rounded shape like a coconut! While many of them are used as taxis, in certain countries in Asia they are a common mode of transport.

From the futuristic Tokyo Water Bus to the cute and oval Canadian Water Taxi and the traditional long boats in Asia, there are many versions of this type of public transport across the world. However, the Tokyo Water Bus would make any commuter feel they are traveling to the future rather than to work.

Also known as the norry or nori, the Cambodian bamboo trains are a faster, cheaper and more reliable service than the normal rail service run by the local government. The trains are essentially a small flat open carriage made of a steel frame using reclaimed rail axles and topped with a flat bamboo bed. They operate for commuters in between Battambang and Poipet.

You have to take your hat off to Cambodian creativity. The two-wheeler tractor taxi is essentially a two-wheeler tractor that has been attached to a passenger and goods carrying trailer which is then used to transports commuters from rural remote villages into bigger towns. Ideal if you remember that some of the roads at in such a state, they are not really fit for vehicles.

The Flying Dolphins in Greece are a ferry boats carrying passengers and goods from Athens to the islands of Argosaronikos. Hydrofoil technology lifts the boat completely off the water once it gets going, making it look like a spider and making the journey more comfortable and faster.

Also known as snow coaches and sometimes set in tanklike rubber chain tracks, the Terra Buses are vehicles equipped with large low pressure tyres that allow it to move in frozen or rocky rough terrain, on and off road. It's a common mode of transport in the arctic and antarctic regions and is especially used by tour operators in the Athabasca Glacier in Canada for visits to the ice plains.

The Dubai Trolley is a tram rail system. What is interesting about it is that it's designed to have heritage-style open-top double-decker trams that make you feel you are traveling back in time. A contrast to Dubai’s modern landscape and skyscraper filled skyline.

Probably one of the most extreme and unsafe commuter rides on our list, the habal habal is a bike that has been modified to carry more than 2 passengers. At its most extreme, they have a square frame that is placed around the rider allowing the bike to carry up to 10 people at a time. In case you are wondering, no, helmets and protective gear are not provided.

Commuters travelling in between Roosevelt Island and Manhattan are able to take the aerial tramway across the river. Not a bad way to start or finish the day and probably one of the nicest commutes on our list.

Ideal for marshland, flooded areas and icy conditions, airboats have increased in popularity as a public transport method in the USA, with tour operators now running scheduled services in particular parts of the country. But you better wrap up warm, though, there is no protection from the elements when you are on board.

Officially called the Personal Rapid Transit (PRT), podcars were once limited to only West Virginia University, but you can now also find them running at London Heathrow. Essentially, they are small completely automated and self driving pods that run regular services in between two points. Have you remembered a futurist movie where this type of transport features yet?

Bamboo rafts are a less refined and romantic form of gondola. Some of them, normally the ones used in natural reserves or park, are even motorised but usually, like a gondola, they have a boatman that stirs the raft with a long pole. While in many areas this method of transport is used mostly for tourism, in the slums of Jakarta in Indonesia, Getek, as it's called over there, is still used to crossed the 13 rivers that cross the city. One thing is certain, you will get wet.

So why are we listing a fairly common method of public transport on our unique list? That will be because boarding the commuter train in India, Indonesia or China takes “taking the train” to a whole other level! In these countries the trains are so overcrowded that in India and Indonesia people ‘train surf’, sitting on the train’s roof rather than on board, or commute standing on non passenger carrying trailers. In China the trains are so full that the railways employ people to push passengers into the trains in order to squeeze in the maximum number. And you thought the London Underground on rush hour was bad!